The patriarchal Mexican board

Hope you are having a great week and welcome back to our brief thoughts on ESG.  This week I’d like to share with you an article Damian and I co-authored on gender equality in Mexican boards.

What do Mexican corporate giants Grupo Alfa, Grupo Mexico, Televisa, Alpek, Grupo Elektra, Grupo Carso, Coca Cola Femsa, ASUR, Gruma, Cuervo, Peñoles and Megacable have in common? Well, as of 2019 none of them had women in their board, and they are a full third of the of 35 top companies in the Mexican Bolsa’s IPC index surveyed by Miranda ESG/IR. This puts Mexico behind other countries. 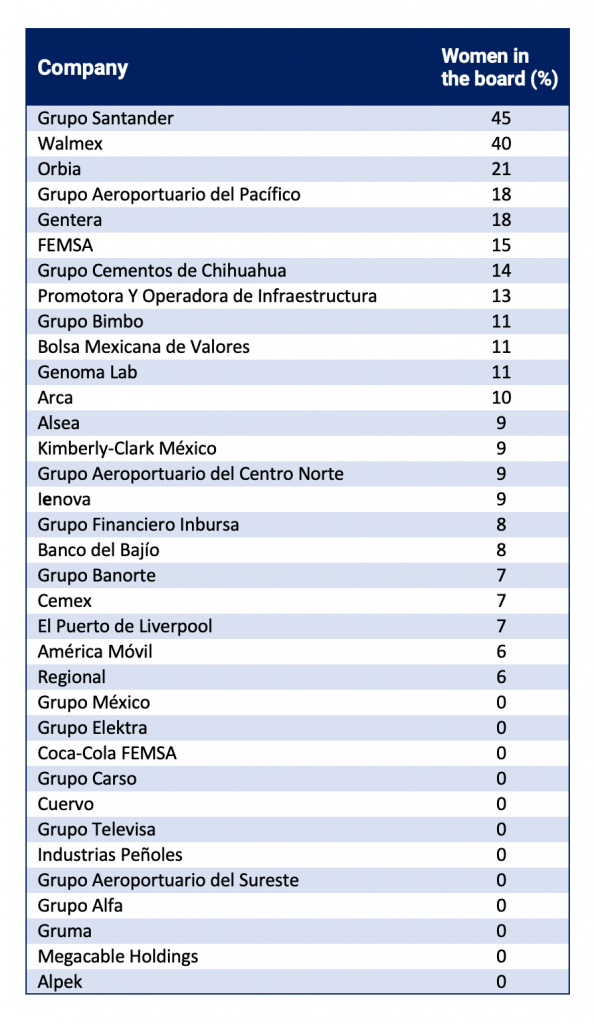 Some of the names on the men-only boards are not especially surprising. Grupo Mexico, Grupo Carso, Grupo Alfa and Peñoles are traditional mining and industrial companies, run by patriarchs for generations now. But it’s surprising to see media company Televisa and consumer goods players such as Coca Cola Femsa and Gruma in the same list. Whatever the controlling families’ personal views on gender balance, it would seem a fairly obvious public relations blunder in 2020 to exclude a little over half the world’s population from the company’s ultimate decision-making body.

And kudos to Santander Mexico (45%) and Wal-Mart de Mexico (35%) for having over a third of their board female. Indeed, Santander Mexico went a step further this year and brought Laura Diez Barroso in as chairman of the board. A number of studies have shown that board representation of women needs to move to about 30% for a strong positive impact to be felt.

There are at least four reasons why Mexican companies should have more women in the boardroom.

First, it’s the right moral and ethical to do, irrespective of the consequences. Mexico’s own code of ethics for large businesses recognizes this.

Second, it’s more likely than not to improve decision-making at the board level by bringing another viewpoint, and one that may have useful insights into women employees and customers by sharing a common gender experience with them.  By some measures, women account for 70%-80% of consumer purchasing, and so you would think it is important to understand them. An often-quoted study of about 20,000 companies around the world by the Peterson Institute of International Economics showed that “an increase in the share of women from zero to 30 percent (in top management) would be associated with a 15 percent rise in profitability”. A recent, excellent report by Bank of America (“Womomentum”), March 2020, shows that companies with a high proportion of women in leaderships positions have higher valuations, and better profitability.

Third, more and more institutional money is linked to ESG factors, of which gender balance in the board is a fairly easy one to measure. If you want to attract such money, it makes sense to avoid appearing to be misogynistic in a way that is impossible to hide. (As board representation is public, it’s the first thing a Norwegian ESG fund is likely to look at.) Goldman Sachs no longer will take US and European companies public that do not have a women board member.

Fourth, mandatory female representation may soon become law in Mexico. Quotas for female board members is already in the law in Norway, Denmark, Finland, and even California, among many other places. There are at least two initiatives in Mexico’s Congress (one from PRI, one from Movimiento Ciudadano) which are pushing for a similar rule in Mexico, according to press reports.

As none of this is especially new, and most large Mexican listed companies are fairly sophisticated, why do they not push harder for female representation? The standard argument from the companies is that experienced women board members are hard to find. Given that qualified board members often need to be former top executives of companies, and not many women make the executive suite (only 8% of CEOs, 10% of Executive Committees, and 16% of VPs in Mexico are women, according to McKinsey), there is obviously some merit to that argument.

That said, raising female board representation may help break the vicious cycle, by having board members pushing harder for women’s promotions, and acting as role models. And as if each of the top 35 IPC had two women board members, and there was no overlap, we are only talking about 70 women board members in a country of nearly 130 million. (As it there is plenty of overlap; both Blanca Treviño of Softec (Walmex, Bolsa) and Laura Diez Barroso (GAP, Santander) are on at least two boards of IPC companies.

Of course, composing the perfect board is more than about obtaining some semblance of gender balance. Clearly qualifications of each board member are key, as is their complementarity with each other. That aside, the number of board members, how many other boards do board members sit on, age balance, tenure limitations, independent/family balance should play a role too in composing the perfect board. Here the data is harder to come by, as not all companies provide ages, tenure, and their definitions of independent and non-independent directors are somewhat subjective.

A board of more than 20 people is probably too big. The average in Mexico is 13, which is about right. However, companies with boards that are likely too big include Femsa (20), Arca Continental (20), Grupo Televisa (20), Grupo Bimbo (18). With respect to multiple board representation, Claudio X. Gonzalez L. (age: 85), notwithstanding his brilliance and superb business track record, is on 5 boards of the top 35 list (Grupo Carso, Bolsa, Kimberly-Clark de Mexico, Alfa, Grupo Mexico). Also on five boards are Ricardo Touche, Fernando Ruiz, and Armando Garza Sada. With respect to women, apart from Laura Diez Barroso, Blanca Treviño is on the board of two companies (Wal-Mex and BMV).

The average age of a Mexican board is 65 which strikes us as too high, and average tenure is 12.5 years, which seems too long. Overall Mexican boards need to be younger and turn over their people more frequently and more genuinely independently. At America Movil, Mexico’s second largest company after Wal-Mex, one board member is 90 (David Ibarra). At the other extreme the only female board member Vanessa Hajj is 22, presumably only just graduated, and is the daughter of the CEO and grand-daughter of the Honorary Chairman, Carlos Slim Helu. About half of the board members are classified as independent; this is probably a little misleading as many independent board members are part of the friend group of the controlling shareholders..

But, does the board actually matter in Mexico? Clearly in a family-controlled entity, the family and not the board per se is the ultimate decision maker.  But in theory the family should express its control through taking decisions in the board itself, and not over the Sunday dinner table. As families grow and control groups widen, and as more companies are founded by private equity firms, the importance of the board versus the family is growing. And whether family controlled or not, the board projects the company’s values to the outside world.

So, the board does matter, or at least should do, and whether owners like it or not, some gender balance may well soon become a regulatory and ESG requirement. Our counsel is to be ahead of the curve.

Hope this was of use. If you’d like more detail on the boards of these companies, reach out as we have an xls with more granularity. And as usual, if there is anything we can help you with, please reach out. Also, don’t forget to recommend any ESG subject matter that you would like us to research and put in a forthcoming weekly