This week, to commemorate the International Women’s Day, I want to share an article I co-authored with Damian on gender equality in Mexican boards.

Mexican boards remain unacceptably dominated by men, even if a few companies have made some decent progress over the past couple of years in reducing the gender disparity. Based on Miranda ESG’s analysis of the boards of the 35 companies in the BMV’s IPC Index, women held 10% of the board seats as of 2020, up from 8% in 2019, and 7% in 2018. In contrast, women make up 28% of board members in the S&P500, according to Spencer Stuart’s latest survey. Furthermore, looking just at women who are independent members of these boards, the female participation decreases to a mere 4% (vs. 3% in 2019 and 2% in 2018).

What is more surprising though is that a full ten of these 35 Mexican companies have no women on the board at all. These include some of the country’s most progressive and sophisticated companies (Grupo Alfa, Televisa, Grupo Mexico, Gruma, among others), including one of the five Mexican companies selected for Bloomberg’s gender equality index. This of course raises questions on the index methodology. By contrast, all 500 members of the S&P500 have at least one woman on the board. 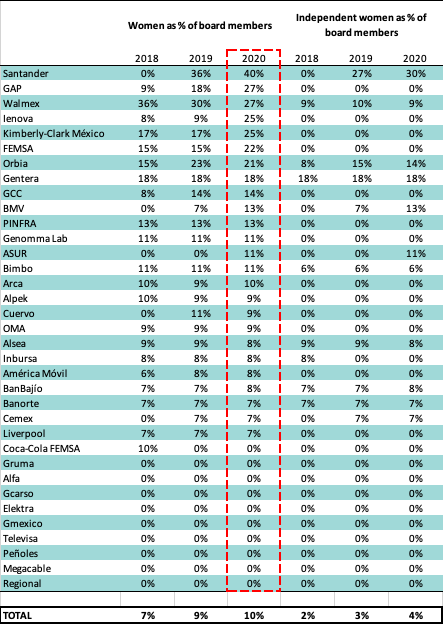 But, why does gender diversity on a board matter?

It is not only about improving a company’s performance. Academic research is in fact inconclusive on whether a more diverse board on average improves a company’s performance. As Katherine Klein from the Wharton School concluded: “Rigorous, peer-reviewed studies suggest that companies do not perform better when they have women on the board. Nor do they perform worse. Depending on which meta-analysis you read, board gender diversity either has a very weak relationship with board performance or no relationship at all”.

Instead, for many (including us), the strongest argument for having women on the boards is that striving for a fair and reasonable gender balance throughout an organization, including the board, is a social obligation of a modern public company. It is difficult for boards to fully understand their stakeholders if they are cutting from the key corporate government body representatives of half the world’s population.

But even if controlling shareholders disagree on this point, there are two very practical reasons why it is in their own interest to aim for a reasonable gender balance on the board.

In short, if you are going to be forced to do something in the future, which is probably the right thing to do anyway, it likely makes sense to do it now, in a voluntary and graceful manner. As every company in the S&P500 has done.

I hope you found this interesting. As usual, if there is anything we can help you with, please reach out.

P.S. On methodology: For 2018 and 2019 our data comes from annual reports. For 2020, data comes from annual reports (when already available) or from the latest available data on company websites. As companies differ in when and how they report board changes, in some cases the changes over years may not always be strictly comparable between companies. We identify woman board members by their first name and, when available, additional gender information provided. This may not always be accurate. We exclude alternative directors. We have rounded up decimal points to the nearest integer. Our goal is to give us a rough indication of board composition, and this is not a rigorous academic study. Should anyone want to receive a copy of our data base of board members please email us and we will be happy to share. And if you detect any inaccuracies please let us know and we will correct them. 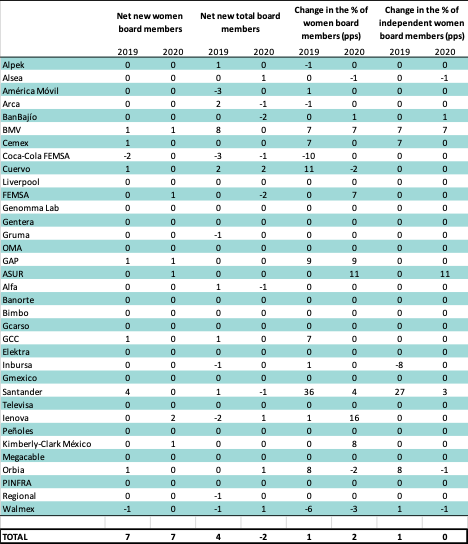