SUMMARY OF THE MAIN RESOLUTIONS ADOPTED BY
THE GENERAL ORDINARY SHAREHOLDERS’ MEETING, NOVEMBER 30, 2022

I. Report on the execution by certain shareholders of the Company of the share purchase agreement dated July 31, 2022 and the consequences and actions required in connection therewith.

FIRST. – It is resolved to take note of the SPA and the Conditions set forth therein, to which the effectiveness of such SPA and the obligations contained therein are subject.

SECOND. – It is approved and noted, in terms of the SETA Notice, SETA’s intention to pledge the Series BB Shares of the capital stock of the Company, of which SETA is the holder, to guarantee compliance with the obligations of the New Financing, contingent to the acquisition of the shares in terms of the SPA.

THIRD. – It is hereby acknowledged and approved that the Company carry out all acts that may be necessary or convenient in connection with the New Financing and the Security Documents in order to evidence that the shares issued and the title covering the Converted Series B Shares pursuant to the June 11 Meeting Resolutions will apply to guarantee the New Financing under the terms set forth in the SETA Notice.

FIFTH. – It is hereby authorized that, in the event that the Series BB shares representing the capital stock of the Company are converted into Series B shares representing the capital stock of the Company, the Company submit any and all notices, notifications or documents and carry out all acts that may be necessary for the purposes of, immediately after the delivery of such instruction, (i) commencing the listing on the Bolsa Mexicana de Valores, S.A.B. de C.V. (ii) carry out the corresponding transfers or entries in Indeval for purposes of (y) recording that the Converted Series B Shares have been pledged in terms of the respective security agreements, and (z) credit the Converted Series B Shares to the account established in terms of such security agreements for the benefit of the creditors of the New Financing, (iii) the Secretary non-member of the Board of Directors of the Company to make the corresponding entries in the Company’s share registry book, and (iv) in general, the Company shall carry out any legal acts, formalities, steps, procedures or deliveries of documents that may be necessary before any securities depository entity, authority or stock exchange in the United Mexican States or abroad, as well as before any person, that may be necessary to consummate and fully satisfy the conversion of the Series BB shares representing the capital stock of the Company into Series B shares.

SIXTH. – The automatic cancellation of the Series B Shares is approved in the event that the Ordinary Pledge Agreement is terminated and this is not substituted or replaced, either totally or partially, by a guarantee agreement whose object or in whose assets are the Series BB Shares granted in pledge, and provided that the Company, through the Secretary of the Board of Directors, has received written confirmation from the creditors or the agent, as applicable, under the New Financing, of said circumstance. Likewise, it is approved that the Company carry out all the necessary actions to withdraw said security from Indeval and cancel it.

SEVENTH. – It is approved that the Company, through its attorneys-in-fact, carry out any legal act, management, process, procedure, dispatch, procedure, execution, notification, instruction or delivery of agreements or documents in connection with or derived from any of the foregoing resolutions.

EIGHTH. – It is hereby noted and approved, the report on the resignation submitted by Messrs. Diego Quintana Kawage, Guadalupe Phillips Margain, Rodrigo Antonio Quintana Kawage, José Bernardo Casas Godoy, Próspero Antonio Ortega Castro and Christian Whamond as members and/or Chairman of the Board of Directors of the Company and corresponding committees, ratifying their lawful acts during their appointment, granting the broadest release applicable by law, as well as, if applicable, hold them safe and harmless from and against any claim, and to indemnify them from any liability related to, or derived from, directly or indirectly, their performance as members of the Board of Directors and/or of the committees of such board, including the payment of indemnification from any damage and/or loss that may have been caused and the necessary amounts to reach a settlement of any such claim, unless such liability is the result of their negligence, bad faith or willful misconduct, or derives from illicit actions as set forth in the Securities Market Law and any other applicable legal provisions, including the noncompliance of the duty of loyalty pursuant to such law.

III. Report regarding the appointment of the three proprietary members of the Board of Directors appointed by the Series “BB” shareholders and approval of resolutions in this regard.

IV. Appointment of the persons who will be members of the Board of Directors of the Company, to be appointed by the Series “B” shareholders and adoption of resolutions in this regard.

TENTH. – Likewise, it is resolved to authorize the appointment of Messrs. Mr. Pierre-Hugues Schmit, Mr. Eric Delobel and Mrs. Emmanuelle Huon as new members of the Board of Directors, appointed by the shareholders of the Series “B” shares.

V. Appointment of the Chairman and ratification of the Secretary, who is not a member of the Board of Directors of the Company, in accordance with the provisions of Article Sixteen of the Company’s Bylaws, and approval of resolutions in this regard.

ELEVENTH. – It is approved to appoint Mr. Nicolas Notebaert as Chairman of the Board of Directors., in the understanding that such appointment is subject to the condition precedent of the Closing.

TWELFTH. – It is approved to ratify Mrs. Adriana Díaz Galindo as Secretary of the Board of Directors, without being a member thereof.

THIRTEENTH. – Finally, it is approved to maintain the independent members of the Board of Directors of the Company as members of the Audit Committee and the Corporate Practices, Finance, Planning and Sustainability Committee.

In this regard, the Board of Directors and the Audit and Corporate Practices, Finance, Planning and Sustainability Committees would be integrated as follows, once the Condition Precedent is met: 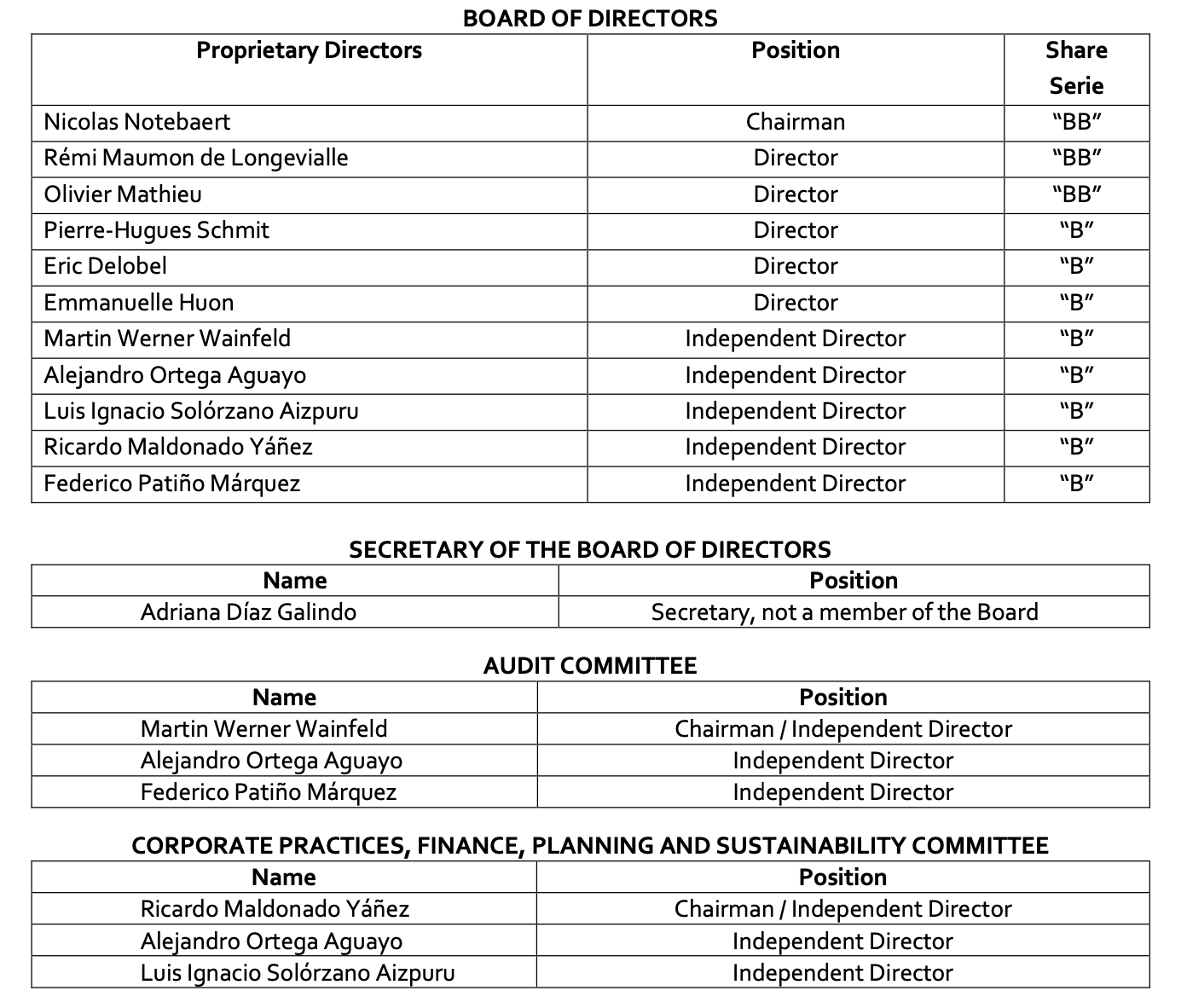 FOURTEENTH. – The appointments of the Board Members, Chairman of the Board, Chairmen of the Board Committees and Secretary of the Board of Directors approved at the Meeting, shall be effective and shall continue in office until such time as a Shareholders’ Meeting resolves otherwise.

VI. Proposal, discussion and if applicable, approval of the designation of Special Delegates to formalize the resolutions adopted by the meeting.

Hoteles City Express cordially invites you to join its 4Q22 Conference Call. We will release our 4Q22 results on Wednesday, February 22, 2023…

Mexico City, Mexico, January 31, 2023—Grupo Aeroportuario del Centro Norte, S.A.B. de C.V., informs that it was recognized as one of the 12…