Revenues of the sample of 63 companies listed on the BMV and Biva that we follow were up 17% and EBITDA rose 46%, mainly due to the re-opening of the Mexican economy as several activities were closed during 2Q20. In addition, net profits turned (very) positive due to the sample’s stronger operating performance, AMX’s FX gains, Walmex’s lower tax payments and lower provisioning in the financial sector. The sectors with the best performance were hotels and airports, since last year they were the most affected.

Telecommunications companies presented a fairly stable operating performance, despite a stronger economic activity. AMX’s net additions were 4.2 million (2.0 million in post-payment and 2.2 million in prepayment) in 2Q21, slightly lower than in 1Q21, while revenues remained stable on an annual basis, and the EBITDA margin improved 0.7 percentage points driven by Central America, the Caribbean, Austria, Argentina, Colombia and Peru, since Mexico’s and Brazil’s profitability remained practically unchanged. Net profits rose significantly due to FX gains. Meanwhile, Axtel presented fairly stable operating results in Mexican pesos (on a comparable basis) and continues to consider the sale of its infrastructure business.

Televisa’s and TV Azteca’s open-TV businesses saw a stronger advertising demand, which boosted their revenues in a significant way and led to higher margins.

In the Pay TV business, Megacable was the best performer in terms of net additions since these reached 157 thousand in the quarter (which included 21 thousand of video), compared to Cablevision’s 62 thousand (with net disconnections of 32 thousand in video) and SKY’s 19 thousand. Megacable and Cablevision’s mobile telephony businesses continued to expand in a very notable way.

Traditional self-service companies continued to face an unfavorable comparison base due to last year’s panic purchases and, in the case of Chedraui, due to the appreciation of the FX rate that reduced the sales of its operations in the US. For these reasons, the sector’s total sales rose marginally. Chedraui’s same-store sales in Mexico advanced 7.8%, followed by Walmex with 4.7%, and Lacomer + 0.2%, which compare to the 1.4% growth at ANTAD. Soriana recorded a 1.4% decline in this indicator. The sector’s profitability improved as a result of its focus on higher margin categories and operating efficiencies.

In coming quarters, the sector’s revenues could be supported by a more benign comparison base. Although companies in the sector have begun to close some of their stores earlier due to the pandemic restrictions, we believe that they can offset the impact with higher digital sales, as happened last year. After the end of the quarter, Chedraui announced that it had completed the acquisition of Smart & Final in the United States.

On the other hand, Oxxo delivered spectacular results driven by a 15.6% increase in same store sales, due to a higher mobility, which boosted total revenue by 17%. The company’s operating leverage more than offset the change in the store attendant’s employment scheme from commission agents to employees, which translated into a 59% EBITDA growth. This performance will largely depend in the future on the pandemic.

Results of specialized retail companies were spectacular due to the reopening of economic activities and, in particular, of shopping centers. In addition, sales by digital segments continued to expand significantly (currently representing 24% of Liverpool’s total revenue, for example). Total Liverpool sales were up 155% (same store sales + 166% in Liverpool and + 944% in Suburbia), while those of GSanbor grew 197%. Furthermore, the quality of Liverpool’s loan portfolio improved with a 3.1% NPL ratio. The two companies operated with positive EBITDA. Despite a stronger operating environment, GSanbor closed two stores, Valle Dorado and Irapuato, which slightly reduced its sales floor.

In the restaurant segment, Alsea experienced a strong recovery due to the reopening of the economy, in addition to a significant growth in home delivery. Total revenue increased 141% (with same store sales up 67.1%) and EBITDA was positive, compared to a negative figure from the previous year.

Hotel companies and Fibras are in a clear recovery due to higher tourism levels, mainly recreational and in beach areas. Occupancy reached 40.6% in the case of Fibra Inn, 53.3% in Hotel, 47.7% in Fibra Hotel, and 38.0% in HCity. As a result, all the companies in the sector showed an exponential growth in terms of revenues and significantly higher profitability levels with a positive EBITDA. Several of the companies / fibers in the sector have very high leverage due to the still low generation of EBITDA compared to previous years. However, Hotel carried out a MXN$500 million capitalization last year and HCity will carry out a MXN$1.3 billion capitalization. The pandemic remains the main source of uncertainty for the sector.

Airlines’ and public airports’ traffic improved quite substantially due to the increase in international and domestic beach tourism, mainly. Asur mentioned that total traffic at its airports rose 13.2 times (not percent) and that it is only 14% below pre-pandemic levels. That of OMA grew almost 8 times and is 24% lower than the pre-pandemic level. That of GAP increased more than 5 times and in the accumulated it is 23% below the pre-pandemic levels. Airport revenues rose sharply while margins were at very higher levels once again. Volaris’s case is notable since most of its indicators are above those of 2Q19. On the other hand, Aeroméxico continues with the Chapter 11 negotiations and Interjet is not operating.

The food sector was affected by the appreciation of the Mexican peso against the US dollar, which reduced Bimbo’s and Gruma’s total sales, while those of Lala were practically unchanged in Mexican pesos. Gruma and Lala’s profitability was impacted by higher raw material costs. On the other hand, Bachoco’s revenues were up 27% and EBITDA quintupled, supported by higher prices and volumes due to the reactivation of the institutional channel. Sigma also grew at double-digit rates in both revenue and EBITDA as it transferred the higher cost of raw materials. The sector’s net profit grew xxx mainly due to the improvement that Bimbo and Bachoco experienced. Food companies face a more favorable comparison base in the second half of the year, so we expect their revenues to improve, depending on the impact of the pandemic. However, the sector’s profitability could remain under pressure due to high raw material costs.

Both AC and KOF reported positive results and strong growth in terms of revenues and EBITDA. They benefited from the reopening of the economies, which allowed them to place higher volumes, mainly of flavors and water, at higher prices in their operations in Mexico and South America. This generated an expansion in the two companies’ gross and EBITDA margins. Net profits advanced significantly due to a strong operating performance and a low base of comparison.

The conglomerate / industrial sector benefited from a solid global macroeconomic performance, which continued to drive up the price of commodities and demand from certain sectors such as the automotive industry. This more than offset the microprocessors supply constraints in the latter. GCarso also benefited from the significant operational improvement at the GSanbor level. Alfa, Alpek, GCarso, GMexico, Elementia, Orbia, Nemak, Gissa, Vitro and Agua, reported very positive results. Alfa increased its EBITDA guidance for the year by 8% to US$1,767 million due to Alpek’s stronger performance (EBITDA was revised up 17%). Orbia revised up its guidance for the year. Agua raised its projected revenue growth to 17% but reduced slightly the EBITDA margin, leaving total EBITDA unchanged.

Companies in the housing sector saw a high revenue growth due to a still strong demand, the re-opening of the Mexican economy and a higher penetration of digital channels. They continued to focus on higher priced units, which boosted the average sales price. In addition, most of them registered a higher volume. Margins improved due to operating leverage. Free flow was positive in all cases, despite the fact that companies resumed construction and acquisition of the land reserve. We believe that the sector’s prospects remain solid due to the existing housing deficit in the country and the support of government entities (during the period, INFONAVIT reduced the interest rate on loans in pesos) and commercial banks.

Cement companies faced a very favorable environment with a combination of higher volumes and prices in all their operations, which allowed them to present very satisfactory results. In Mexico, Cemex’s volume was up 28%, and GCC’s 17%, fueled by higher demand in bags and higher construction activity. Margins expanded significantly due to operating leverage. GCC revised upwards its guidance for the year due to its strong results in the first half of the year and because it expects the positive “momentum” to continue during the second half of the year.

The bank’s total loan portfolio registered a 5.6% YoY reduction in June, reaching MXN$5.3 trillion, according to the CNBV figures. This performance was mainly due to the 12.9% contraction in enterprises, 24.0% in financial entities, and 1.7% in consumer credit, which was partially offset by a 7.8% increase in government entities, and 9.4% in mortages. Asset quality remained solid with a 2.45% NPL, slightly higher than the 2.12% of 2Q20, but below the 2.52% of May this year. The coverage ratio remained above 1.5x. The capitalization ratio was 18.38% at the end of May (the most recent information), well above the regulatory minimum.

The total portfolio of public financial groups decreased (Bancomer, BSMX) or barely grew, but asset quality improved (with the exception of Bancomer). The financial margin and the NIM fell (Bancomer’s was stronger) due to lower interest rates. However, the provisioning was much lower in all cases as a result of stronger macroeconomic conditions, which boosted net profits and ROE significantly. GFNorte and BanBajio reduced the expected growth of their loan portfolios, but revised upwards their projected net profits due to a lower cost of risk. GFNorte also adjusted its 2021 GDP growth projection to 5-6% (from 3-4%), but increased the estimated inflation to 5-6% (from 4%).

In the non-bank financial sector, Unifin presented the best results with a positive loan growth, a lower NPL ratio, higher origination and a significant increase in the adjusted financial margin and in its net profit. Gentera’s portfolio continued to decline. However, it benefited from a lower cost of funding and a lower provisioning, which resulted in a significantly higher net profit. Findep’s portfolio grew slightly excluding the Finsol Mexico and Finsofo divestitures, and the company also benefited from lower provisioning.

In terms of occupancy, the best performing segment was logistics-focused real estate, given the continued growth of e-commerce. All other segments registered a lower occupancy. The office segment was the one with the largest decline in occupancy, which we believe was largely due to oversupply in Mexico City and a weak demand in Monterrey and Guadalajara. However, the demand for office space in the border regions remained red hot (Upsite announced a contract for a new Buid-to-Suit building in Tijuana). In the commercial segment, occupancy levels fell (Funo, Danhos, Fibra Shop). However, Fibra HD surprised positively with an improvement in this indicator. Some Fibras continued to acquire properties, taking advantage of the prevailing situation (FMTY, Prologis). 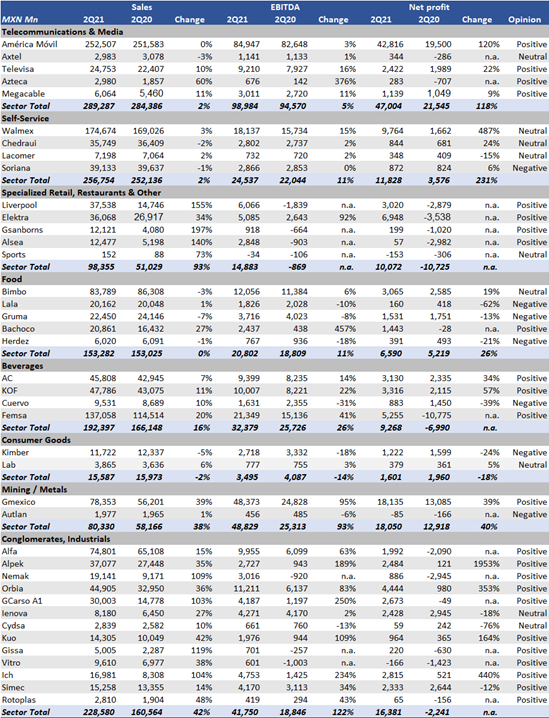 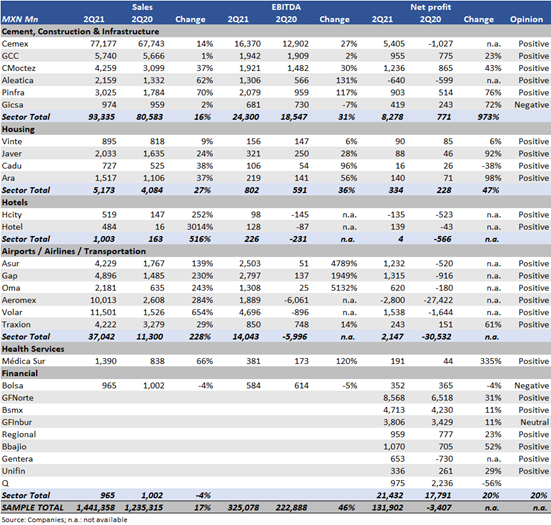