López-Gatell’s COVID-19 Scorecard. How did he do?

Like much else in Mexico, Health Deputy Ministry Hugo López Gatell’s (HLG) handling of the COVID-19 pandemic has been heavily politicized and polarizing. It’s also been highly instructive, a class in health pandemic communication in real time. So how did he do?

To his legions of fans, mostly supporters of the current government, HLG combines technical competence with an ability to explain public health policy guidelines to the Mexican public. He persuaded a reluctant President to take the virus seriously and largely cede public health decision-making to the specialists. He struck the right balance between implementing important social distancing measures, such as closing down most of the government and non-essential businesses for three months, and allowing parts of the economy to continue functioning, thereby staving off social problems. He is accessible, and apart from his daily press briefings to the national press, he has given long and detailed interviews to multiple publications.

To his many critics, mostly those who also oppose the current government, he has made one mistake after another. He said on a number of occasions the virus was peaking, only to be proven wrong. He has been criticized for underreporting cases and deaths, undermining his credibility and helping weaken the effectiveness of social distancing measures. He has dismissed testing and tracing as wasteful in the Mexican context, meaning that the spread of the pandemic has been difficult to assess and contain – until it was too late. While dogmatic on the dangers of junk food and the like, he has been slow to change message on about mask wearing. In his daily briefings, he often seems more interested in defending his own track record, then sticking to the public health measures that need to be followed.

Clearly the truth lies somewhere in the middle. López-Gatell is neither the malevolent political stooge his critics make him out to be, nor the saintly doctor others hold him up as. Anyone who draws the ire of both the anti-lock down zealots (Ricardo Salinas) and the pro lock down idealists (Julio Frenk) is probably doing something right. And while the statistics are hard to dispute – Mexico’s per capita death rate is now among the highest in the world, he has had a difficult hand to play. (Please see the chart below which puts Mexico’s deaths from COVID-19 in the LatAm context – reported deaths/per capital are lower than in Chile, Brazil, Peru but higher than in Colombia, Argentina).

Mexico’s health system is chronically underfunded. The Mexican people while young are unhealthy on average. The economy is in such poor shape, and social problems so acute, that a full lock down on European scale was probably not feasible. Mexico would have been in trouble whomever was in charge, just as much of Latin America is (all of whom have quite different governments). 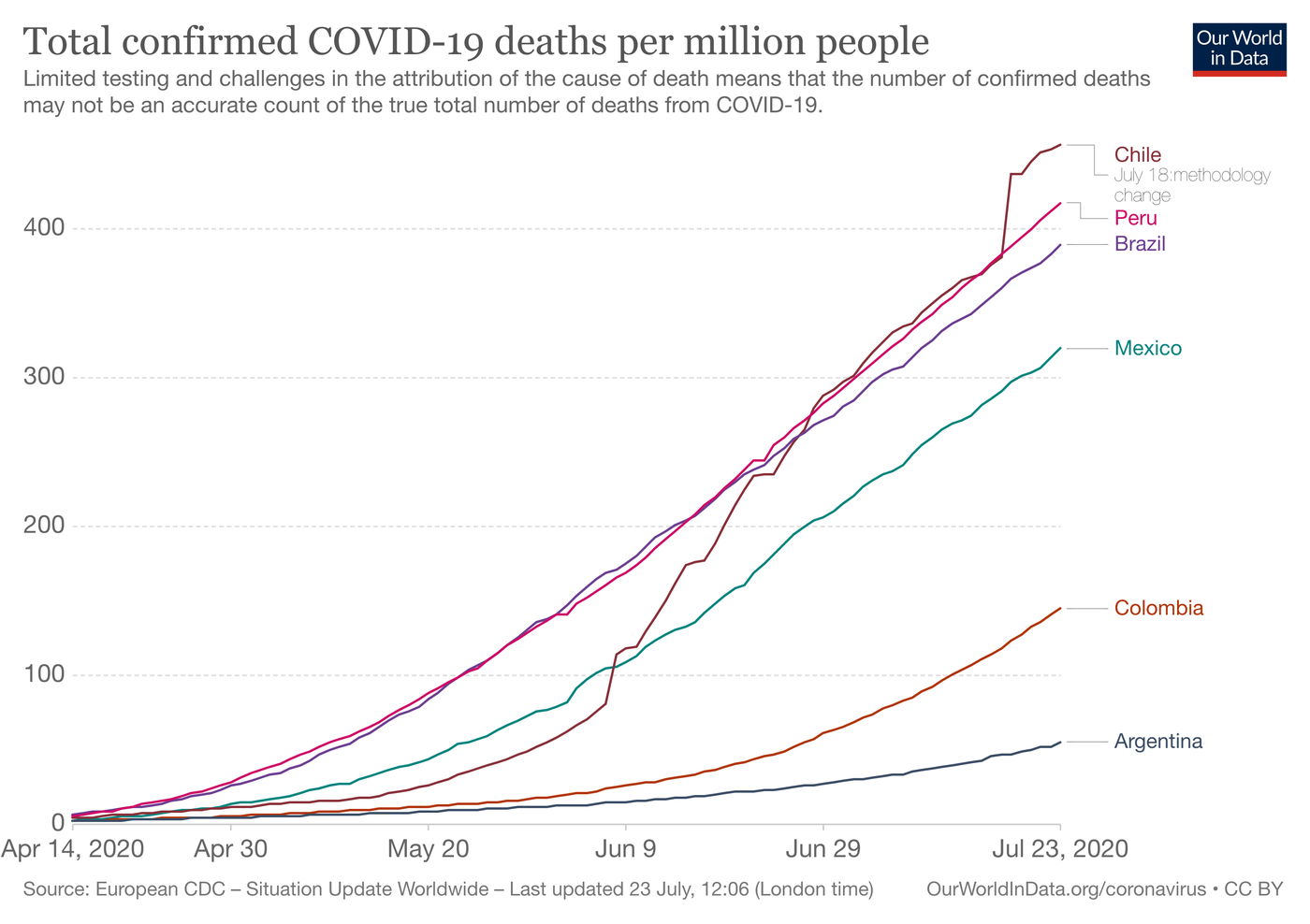 Recognizing that we are not health specialists, but communication analysts, below we seek to rate the deputy Minister on some of his successes and failings, all with the huge benefit of hindsight. We recognize that very few people in Mexico are more experienced and better trained on infectious diseases than the deputy minister.

Since January, López-Gatell warned of the serious threat of the Coronavirus. Since mid-March he took to the cameras every night, reported on what has happened, and answered all questions with a mixture of scientific knowledge and social engagement. He has for the most part kept the President on his side, and persuaded him to cede decision making to the health professionals, after a hesitant start. Much of his messaging has been spot-on. López-Gatell has time and time again asked the Mexican population to stay home seeking to protect themselves and their relatives and other acquaintances. As the playbook requires, he has provided the public mountains of data, every day.

López-Gatell has rightly emphasized that being overweight and unhealthy increases the chances of dying from COVID-19 and that Mexicans need to embrace a healthier lifestyle. However, given that an overweight, unhealthy person cannot easily become healthy in a month or so, this diatribe against junk food often seems more of a distraction and blame-game than a serious action point.

He has long insisted in public that mass testing and tracing was wasteful and impossible in the Mexican context, apparently against the advice of the World Health Organization and other Health Experts.  Instead of mass testing, HLG preferred to use a sentinel model of a small but representative sample of tests to make predictions and guide policy. Whatever the merits of the HLG’s arguments, they have been a PR disaster. All his critics have pointed to Mexico’s low testing levels against all countries in the world, as evidence the government was seeking to suppress the number of cases. Underreporting of the cases may have lead Mexicans to be overly relaxed about the disease and not take social distancing seriously enough. The chart below shows that Mexico has tested far less than other countries in Latin America (and the rest of the world). 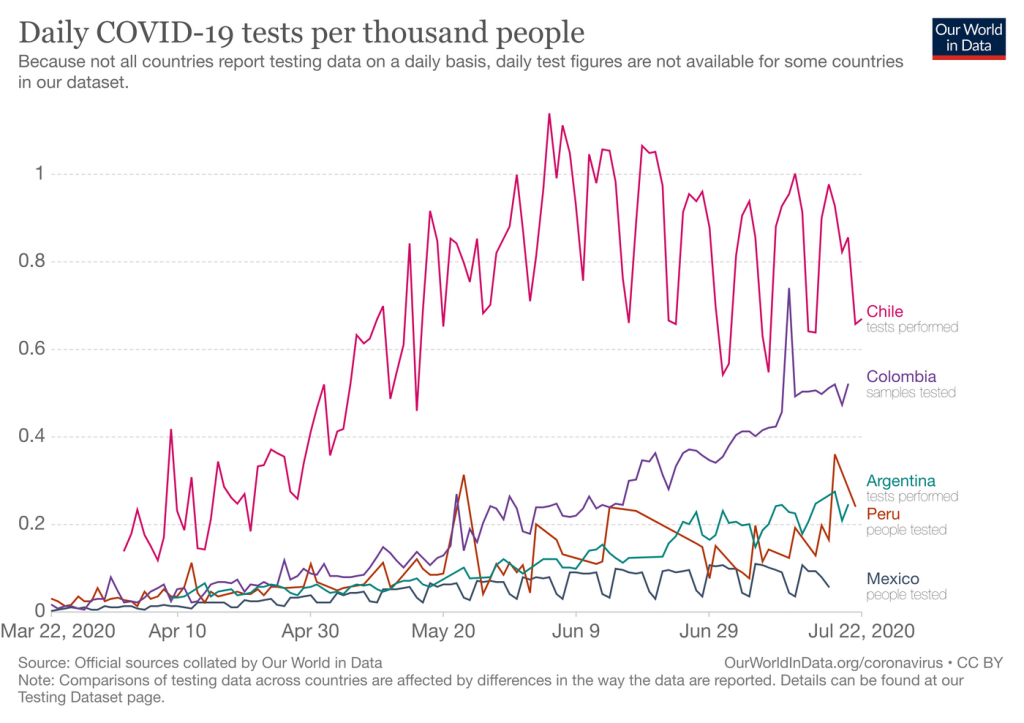 Due to lack of testing, Mexico has extensive underreported cases, as the Deputy Minister is the first to accept (by a factor of maybe 8x). But it also seems to have underreported deaths by COVID-19, based on numerous studies showing excess mortality in the country. As many people who died of coronavirus were not tested, their deaths were attributed to other factors. The current death count of about 41,000 may be underreported by half, based on excess mortality figures, indicating that Mexico’s per capita death rate would be among the highest in the world (and in fact higher than in Brazil, Peru, Chile where testing has been more prevalent). It is also true that many excess deaths can be explained by the health system’s capacity being used to treat COVID, leaving other illnesses unchecked.

By waiting until late March to announce lock down measures, López-Gatell was criticized by some in being slow to impose tough lockdown measures. At the time, HLG argued it was best to wait until local infection had set in before locking down, otherwise the population would tire of lockdown if done too early. (The President went on hugging Mexicans well into late March.) It now seems fairly clear that the countries that reacted very fast and locked down hard (New Zealand, Taiwan) were better off than those that did not. That said, when Mexico did (partially) lock down late March onwards, the number of reported cases and deaths was still very small, and below the level of other countries when they locked down.

When lockdown measures did come, they were relatively mild by global standards, and often not enforced.  The legal measures were directed at companies and the government, and not at people, unlike in Europe, Colombia, Chile. Nonetheless, the high social cost of full lock down in an emerging economy such as Mexico’s probably made European-style lockdowns near impossible in Mexico, as the social cost would have been prohibitive. It’s also likely any tougher measures would have been ignored too, given lack of government’s compliance ability, and economic necessities for many people of going out to work. As the chart below shows, Mexico had the least tight restrictions in the region. 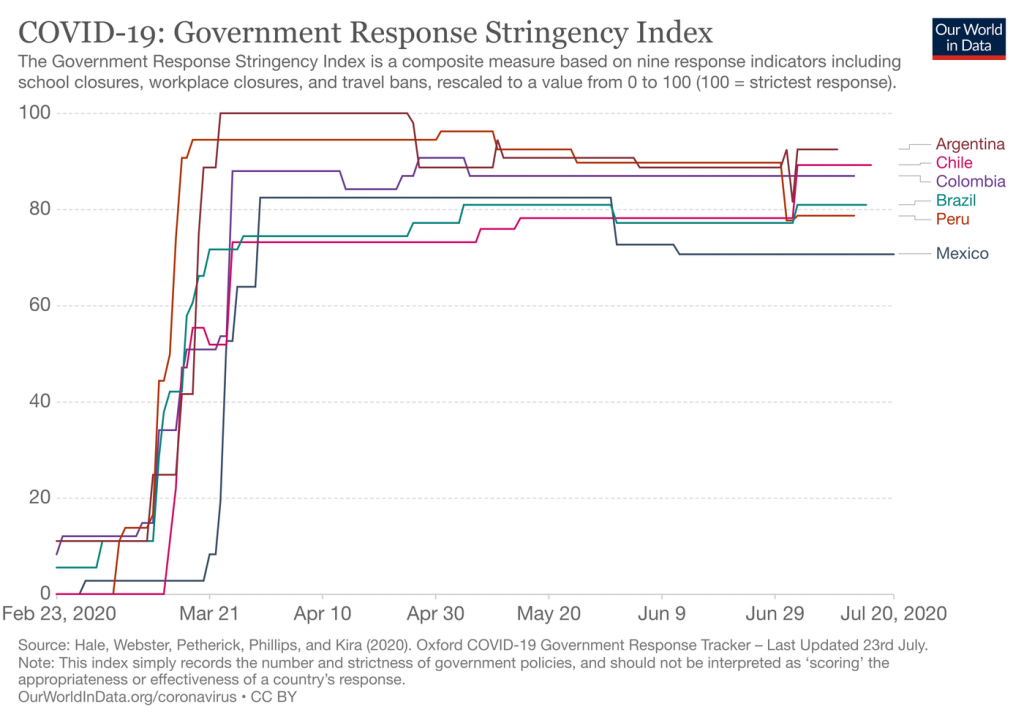 The Deputy Ministry on occasions categorized the use of masks as not useful and even damaging, as it would limit those available to hospitals and health workers. HLG (and especially the President) often appear in public without wearing a mask, setting a poor example to the rest of Mexico. This logic of this is hard to comprehend as wearing a mask slows the spread of the disease and does not hurt the economy. The Finance Minister urged the public to wear masks to help the economic recovery, and then was seen in public with the President without the mask.

López-Gatell has consistently underestimated the trajectory of the illness, forecasting that peak cases and deaths would happen in May, then June – with records in fact being reached in July. (To be fair, he has also said that it would a long drawn out fight.) In retrospect, he should have explained better that the goal of flattening the curve was to slow the growth rate versus what would have happened without social distancing measures, in order to avoid the collapse of health facilities from a sudden peak in cases. Ultimately, Mexico did not witness tragic hospital crowding scenes such as the ones seen in Italy and Spain, so one may argue that the flattening strategy was successful. That said, the constant use of the term “flattening the curve” and “having flattened the curve” was understood by many as not lower growth versus a counterfactual, but that the number of new cases would slow and then soon fall in absolute terms, – which has yet to happen, and this has undermined the overall credibility of the Health Authorities.

While there are several situations in which local and federal messages conflict, one that stands out was when the Head of Government, Claudia Sheinbaum, announced a week in advance that Mexico City would transition to the orange phase in the traffic light system. What is most striking was that that announcement depended on a series of factors that had not yet occurred, such as hospital occupation or the trend in positive cases in the upcoming days. Similarly, the simultaneous support for face masks by certain local health secretaries and their rejection by federal officials, have raised doubts among the population about their effectiveness.

In its attempt to regionalize health measures, the Ministry of Health implemented a traffic light system, which, based on certain criteria, each state would be assigned guidelines to follow. Each local government would have to abide by them with the option of increasing certain restrictions, but not decreasing them. For the traffic light system to be successful, the federal government had to remain consistent with the selected criteria and methodology. However, a change in the rules during the second week of its usage, led to the lifting of measures in 16 states. Without that modification, 15 states would’ve kept most businesses closed. Overall the traffic light system has appeared to be discretionary and subject to political pressures of Governors. The confusion has undermined the government’s lockdown measures overall. 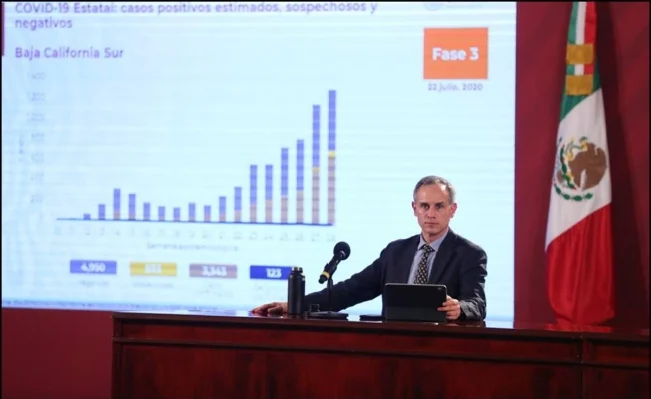