Yesterday, President Andrés Manuel Lopez Obrador delivered his Second State of the Nation Address. Although he did not mention his approval ratings, we have reason to believe he is satisfied with them.

The day before, he gave his opinion on a Reforma poll that placed his popularity at 56%. He suggested that the poll was “rigged” and that his own polls place his approval levels anywhere from 64% to 70%. He added that even if Reforma was right, that would mean that there are more Mexicans citizens who support his government than the 30 million who voted for him in 2018.

Declining Popularity … Due to Covid-19?

Even though Mexico has experimented a series of economic and health challenges, which have put the government’s weaknesses on display, this has not been reflected in AMLO’s approval ratings. According to Oraculus, a poll of polls, the President’s approval ratings were at 58% in March 2020, as well as in August. 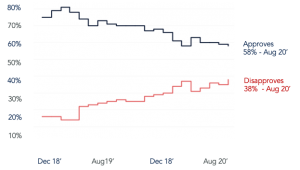 However, the polls have reflected a steady decline since Lopez Obrador took office in December 2018, when his approval ratings were at 75%. Throughout his 20 months in office, they have dropped 18 points, the lowest they’ve ever been.

During this period, AMLO has experienced two moments of a steeper decline in his approval levels: May 2019 and March 2020. In both cases, public opinion experts have pointed out that the President’s image was tarnished by the increase in violent crimes. The second quarter of 2019 saw the killings of 13 people in Minatitilán, the murder of a young woman on UNAM’s campus and the discovery of hidden graves. The first quarter of 2020 experienced an increase of femicides along with a president who was reluctant to accept the existence of gender violence.

In order to have a complete image, it’s important to view the approval levels of the former presidents. In his first 20 months in office, AMLO has seen the largest drop in presidential approval ratings (out of the last 5 presidents) – only Enrique Peña Nieto and Vicente Fox had similar rating declines, of 8 and 12 percentage points, respectively. This may be because López Obrador held an extraordinarily high approval rating at the start of his presidency, even reaching 81% in February 2019. Also, compared to his predecessors, Lopez Obrador has the second highest approval rating at the time of the Second State of the Nation Address – polls placed Felipe Calderón’s slightly higher at 62%. 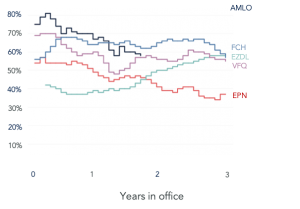 What will happen with AMLO’s popularity?

With clear plans in mind but no crystal ball, anything could happen in the rest of his term. Just like financial journalist Enrique Quintana reminds us, weeks after giving a similar speech to AMLO’s, President Peña Nieto (whose approval levels were already declining) would face the “Casa Blanca” corruption scandal and the Ayotzinapa kidnappings of 43 students. President Calderón would face the untimely death of his Minister of Interior, Juan Camilo Mouriño, in an airplane accident, just months after his Second National Address.

Even if President López Obrador’s approval ratings are higher than those of Justin Trudeau, Emmanuel Macron and Boris Johnson, he should be cautious as some weak spots have already emerge. According to the last poll by El Financiero, while 59% of those surveyed approved of AMLO’s presidency, only 27% approve of his performance in fighting corruption. This percentage is even lower for his job approval on security and the economy – only 23% and 19% consider that the government has done a good or very good job in these areas.

There is no doubt that the President’s actions will affect public opinion and the next elections. In 2022, Mexico will be able to hold a referendum that will enable citizens to end AMLO’s term two years early. Although there is a large support for AMLO to finish his six year term, those who aim to make it shorter are increasing. 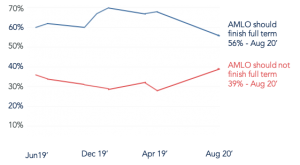 Opinion Regarding AMLO’s a revocation referendum on his mandate
Source: El Financiero

Even when the President’s name is not in the ballot, like in the 2021 legislative midterm and state’s elections, his approval rating will still matter. Not only will he try to maintain his popularity levels but he will also try to use his image to promote his party nationwide. According to Reforma, Morena holds a 22 point lead, aiming to maintain its majority in Congress. At a moment where no candidates have been officially announced, the President’s media friendly personality seems to be paying off.