Before any Covid-19 vaccines were approved by medical authorities, President López Obrador had already announced that vaccine administration in Mexico would be universal and free, making it an astronomical challenge for his government.

Now that the vaccine is available, doubts have arisen about the order in which the different vaccines will be administered, and timelines remain unclear. Here, we will recap the information published in the National Vaccination Program and discuss the vaccine’s progress and when administration is expected to begin. 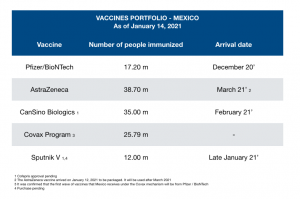 On December 8, members of the presidential cabinet presented the five stage vaccination plan, which would prioritize Covid-19 hospital health care workers and people over the age of 60. Weeks later the government made subtle but important changes to this program: in the over-60 group, those in remote locations would be vaccinated first and, in the under-60 group, teachers and people with pre-existing conditions would have priority. The vaccination schedule has remained intact, despite slow initial implementation. 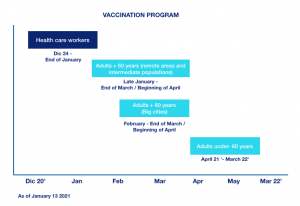 As of January 13, the Mexican government had applied 192,567 doses of the Pfizer / BioNTech vaccine. If we consider that this vaccine requires two doses, which are applied about 21 days apart, only 43,530 members of the medical staff of covid-19 hospitals would have been vaccinated (this figure includes people who are not medical personnel but who got the vaccine ahead of time).

Will the government achieve their first objective?

To be frank, no. This is due to the 21 days (on average) that must pass between the first dose and the booster. Although all medical personnel in COVID-19 hospitals can receive the first dose before the end of January, they would still need the second booster shot. Depending on how the government chooses to present its results, the public will determine whether it is a small win or a loss. 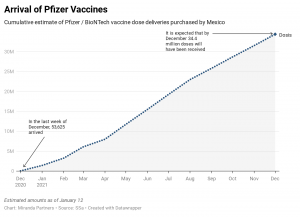 It is contemplated that 1,420,575 doses will be delivered by January. These will be applied throughout the month to both healthcare workers and people over 60 years old in remote communities.

Weeks after starting to vaccinate adults older than 60, the President has cited different numbers for the total population of that age group, on one occasion 15 million and on another 12.4 million, that difference could cause the campaign to take weeks longer than expected.

More accurately, the federal government divided the adult population into three groups according to the type of locality in which they reside. Older adults located in remote areas would be vaccinated in late January with the Pfizer / BioNTech vaccine, which could present logistical challenges given the high levels of refrigeration required and the difficulty of reaching these areas. Days before, the president said that he would find a way to administer the CanSino vaccine to this population, which only requires one dose, but due to delayed delivery dates from the Chinese pharmaceutical company, this objective was not met. 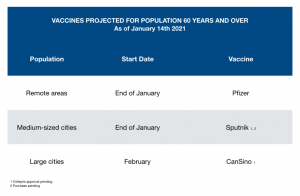 If approved by Cofepris, the Russian Sputnik V vaccine would be given to older adults in mid-sized cities starting at the end of January. Older adults residing in large cities would get the CanSino vaccine. So far, the specific parameters to determine city size have not been clarified.

What about the rest of the population?

Although there is less information on which vaccine will be applied to what group and whether certain geographic areas will be given priority over others, the current vaccination plan stipulates that the population under 60 years of age will be vaccinated starting in April. In recent weeks, two groups have been established to take priority, although it is still not clear which out of these two will receive more importance:

Subsequently, people between 50 and 59 years old will be vaccinated first, then those between 40 and 49, and finally those under 40. To date, there is no information on the vaccination process for children under 16 years of age.