Victor M. Herrera.- By mid-March 2020 the leaders of the Western world were scrambling to use Imperial College of London’s Report 9 Transmission Models to hurriedly design public policies to contain COVID-19 contagion within their own borders. The report made the expressions “social distancing”, “mitigation”, and “suppression” common household terms to debate the best approaches to reduce infection.

European countries, South Korea and Japan started to implement generalized testing to anticipate the contagion spread and reduce the impact on the health systems of their own countries, while at the time the United States and most notably Latin American nations were shying away from generalized testing.  The reasons for the reluctance to test may range from an underestimation of the effects of the pandemic to lack of testing infrastructure, to a desire to limit unsavory news for political reasons. The foregoing resulted in a substantial underestimation of actual cases that in some countries has increased the perception that the pandemic is not as serious as scientists claim.

Since then Europe and the United States have begun to see light at the end of the tunnel in terms of reduced growth in infection rates thanks to the social distancing strategies that were implemented. However, Latin America appears to be just beginning its painful cycle of thousands of infected people requiring urgent medical attention. The good news is that social distancing DOES work and the more committed the population is to enact it, the lower the number of casualties.

As famous as Imperial College’s Report 9 was, by the end of March the university researchers published a lesser known Report 12, modelling the impact of different levels mitigation and suppression and projecting the stress on health systems of 202 countries and the number of fatalities expected under each scenario. Report 12’s database provides valuable information for policy makers to plan for contention.  This article only explores some of the scenarios for the major economies of Latin America.

We also have to keep in mind that these are statistical models following different methodologies, and only as good as the data inputted and the assumptions made.  Governments and other institutions may have their own models that could be more accurate or not.  For instance, the Mexican government has been very careful to not disclose its detailed projection but has said that the virus could eventually infect approximately 67% of Mexico’s 128 million population, resulting in 86 million infected people, with or without symptoms. Officials also have said that approximately 5% of the infected population would become critically ill, and about 2% of that group would eventually die.  Other Mexican officials have mentioned the virus has a fatality ratio of 0.6%. With those numbers you can infer that they estimate a range of 26,000 to 86,000 fatalities. The official number of reported deaths as of April 17 was 578.

The private sector is not keen to explicitly include fatality projections either, but in a recent study prepared by TecSalud of the Instituto Tecnológico de Estudios Superiores de Monterrey, for the Mexican business council Consejo Coordinador Empresarial, scientists estimated that the cases requiring intensive care would range between 129,000 and 501,000, with only range of available ICU beds of 8,000 to 31,000 at the peak.  The difference between those numbers are probable fatalities as very sick people would not be able to get proper medical care.

This table provides a good reference to visualize just how deadly Covid-19 is. It also spreads very fast. On March 20, the United Stated had accumulated 200 deaths, a month later it exceeded 41,000.Respiratory diseases take a sizable toll on human life, and every year thousands of people die of pneumonia and influenza.  For instance, in a bad year, the United States may have up to 50,000 deaths of influenza alone. In recent years, the flu has not been that aggressive in Mexico, but cases of pneumonia and related deaths are numerous.  This table shows casualties of pneumonia and influenza in Mexico for the past five years (2019 numbers are not out yet), but pneumonia represents over 90% of the deaths. 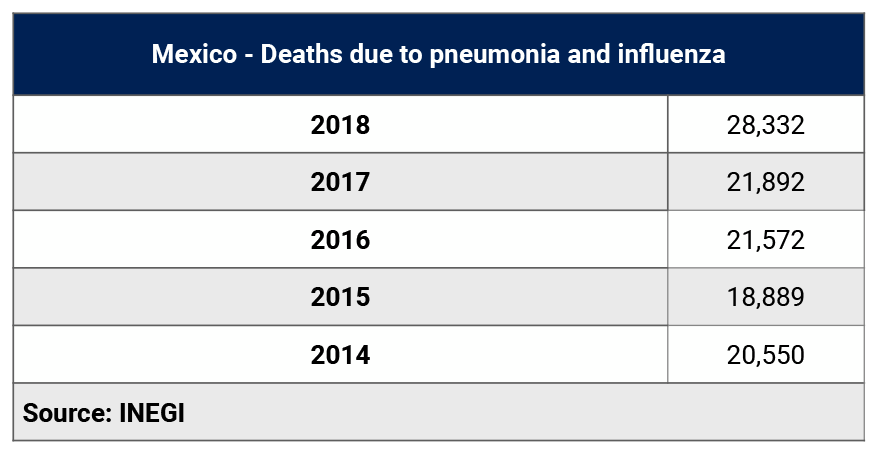 First a reminder of what R0 means, and to avoid the technical definition, it is the average number of people a single infected person will transmit the disease to.  Viruses have different reproduction numbers, and Imperial College’s researches estimate the Covid-19 R0 to be between 2.4 and 3.3 (i.e. one person will infect on average from 2.4 to 3.3 people). Since many countries estimate R0 to be between 2.0 and 2.5, we only include the 2.4 scenario.

Since as far as we know no country in the Latin American region has yet implemented “Suppression” (i.e. reducing R0 to less than 1), we do not include it in the tables, but instead include the “Enhance Social Distancing for the Elderly” at a R0 of 2.4. Imperial College projects contagions and fatalities in a 250-day period.

The Social Distance Scenario is the likely outcome as most countries have implemented it already, some better than others, and is shaded. We include the Unmitigated scenario to show that already hundreds of thousands of lives have been saved by doing something. We add the Enhanced Social Distancing of Elderly as an example that more can be done to limit human loss.

We should emphasize that at this point there are a lot of different epidemiological models circulating, some more benign that the Imperial College model. As a recent article in the Wall Street Journal showed (https://twitter.com/davidluhnow/status/1251174748135948289?s=12) there is a fierce debate between trained epidemiologists (which we are not) on the right assumptions and data to input into a model, given COVID-19 is so new. So the numbers below are illustrative, based on the Imperial model,  and are extrapolations, not trained forecasts per se.

The above countries enter the epidemic with noticeable differences.  Mexico is not prepared to receive thousands of patients in the Intensive Care Units (ICU), because its inventory of ICUs and ventilators is very limited compared to the country’s population.  Mexico has had to rush to acquire whatever it can at a time when supply is limited, and as of this writing, hospitals are beginning to be saturated. To make matters worse, there is a high infection rate with doctors treating patients because they are ill equipped to handle the infection.

Brazil has a better health infrastructure than Mexico, but its President seems not to take the pandemic seriously enough and even the Minister of Health has been sacked at the worst time. Its geography has helped slow down the infection rate, but its contagion curve, although slowing a bit, has not flattened yet. Testing is extremely low for a country of more than 200 million.

Colombia will hurt as everyone else, but it has a better health infrastructure than Mexico and its leaders implemented stringent social distancing earlier than others.  It will fare better. Its contagion curve seems to be slowing down at this time but is not flattening yet.

Argentina has one of the best government health systems in the region and implemented social distancing early, although parts of the population did not cooperate much initially. It is faring a bit better than Colombia.

Chile may be the one who has been handling the epidemic better and has implemented suppression-like measures, such as imposing curfews in some cities where breaks appear.  Although they exceed the 10,000 cases, they only report 133 deaths.  They have tested more than other countries in the region and the low number of fatalities reflects that effort.

As we can see, the world faces a major challenge to contain this epidemic. It has already brought the world economy to a halt. If social distancing is done right, the way the Germany or Austria have done it, the initial lock-down shock is for about 4-6 weeks, even if there will continued to be an impact long after given that some social distancing measures will remain in place.  If a lukewarm approach is taken, the pain will be last longer both from a health and economic point of view. April 18 marked the day Austria began activity after only 452 deaths and less than 15,000 cases, out of which more than 10,000 have recovered.  Their return to normal life will be gradual and they are testing if the contagion has been eradicated or not. As Imperial College’s report mentions, it is likely that another break will occur in the fall, hopefully of lower intensity. It is up to each country to increase their chances of success with governments and population working together. South Korea already got it right.